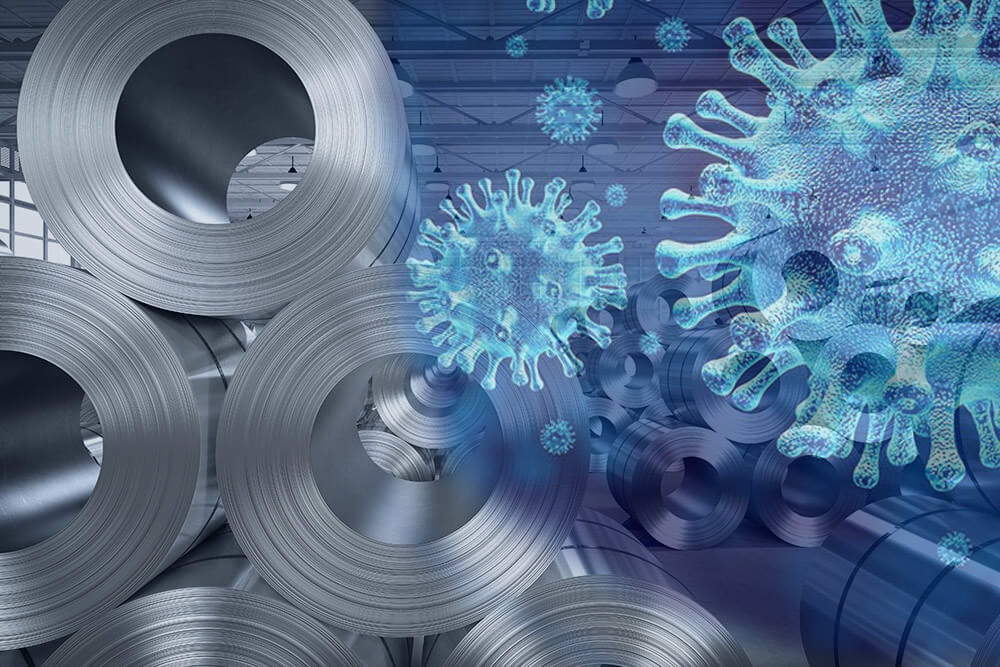 The misfortune came: the impact of the coronavirus on the steel industry

Uncertainty is the most awful thing. Everyone wants to know what we are in for, even if there is nothing good ahead. Yet, any current forecasts live no more than a few days.
Now we have a unique situation. Everything changes so quickly that forecasts made two weeks ago are no longer relevant. For instance, the OECD said on 2 March that its economic outlook forecast for the euro area in 2020 reduced from 1.4% to 0.8% due to the spread of the COVID-19 epidemic in the world. Back on 18 March, the European Commission said in its address to the European Parliament, the European Central Bank (ECB) and other organizations that the European Union will enter a recession this year with a GDP decrease of up to 1%.

It’s a thankless task to make forecasts in general and in the current situation in particular. We will therefore attempt to analyze the possible implications of the pandemic for markets of metal products.
A drop in demand

It is not the coronavirus, but the quarantine introduced to contain it that is eroding the demand. Although if it were not for the quarantine, the disease situation would further deteriorate and the demand would nevertheless collapse.

The problem of demand should be considered in two aspects: the first one is the quarantine shock, and the second is a fall in demand as a result of the economic crash on a medium-term horizon.

Everyone looks at the trends in China when modeling the spread of the coronavirus. We will also pay attention to how the demand for steel in China changed during quarantine. If Chinese statistics are to be trusted, the apparent steel consumption in January–February increased by 5.5%. Though this does not reflect the real market situation. Plants did not halt production completely, building up stocks, and production in China grew by 3.1% in two months. According to Kallanish Commodities, warehouse stock of rebar and hot-rolled coil increased by 2.5 times in February against December last year. Given a growth in warehouse stock, the real steel consumption in China in January–February fell by 19%. There are no statistics for January, but it is possible to assume that a fall in steel consumption in February, during the quarantine, was at least 50%.

Some more Chinese statistics. In January–February, investment in fixed assets plunged by 24.5%, investment in infrastructure by 30.3%, which is higher than the decline during the crisis of 2008–2009.

According to McKinsey, a ‘delayed recovery scenario’ suggests that new cases of infection are expected to peak by the end of April and decline by June. This means the quarantine measures could be, at best, eased in May and lifted only in the summer. Hence, a 50% slowdown in global demand for steel is projected from the latter half of March up to the end of April.

Suppose, the situation really gets better in the summer. So, what are we in for?

According to Fitch, “The interruptions to economic activity are on a scale and speed rarely seen other than during periods of military conflict, natural disasters or financial crises.” JP Morgan says U.S. GDP could drop 14% in Q2. Compared with this, Q2 2008 when a 8.4% fall was recorded, by the way a record high since the Great Recession, is a Sunday school picnic. The unemployment rate in the United States will rise to 6.25% from its minimum of 3.5%. Several million people will lose jobs. Fitch gives a little more conservative estimates, projecting U.S. GDP to shrink by 2.5% y-o-y in Q2. A deep recession is becoming a reality.

JP Morgan says euro area GDP will suffer an even deeper contraction, with double-digit decline of 22% in Q2. Oil producing countries will experience even greater shock. No good will come of it for markets of metal products.

To counter the remarkable economic collapse, major economies announced unprecedented support measures, both fiscal and financial. Interest rates and reserve requirements are reduced, new programs of quantitative easing are announced, tax holidays for business and the public are granted. As always, money is injected in the market during the crisis.

It is hard to say whether this will help quickly restore consumption. Especially with regard to a McKinsey’s forecast that a second wave of the epidemic is expected in the fall. Yet McKinsey does not have a monopoly on the truth. No one can accurately predict what will happen next.

It is likely that after the quarantine, plants will attempt to ramp up production and the recovery of supply may advance the restoration of demand. Such distortions will adversely affect prices.

Drawing parallels with the 2008 global crisis, it is possible to see that the demand for steel in Q4 2008 declined by 24–31% y-o-y in key regions (the EU by 28%, the U.S. by 31%, the Middle East by 24%). In Q1 2009, the decline rose to 44–55% y-o-y. No less damage can be currently expected, since a stronger decline in major economies is projected. It has to be noted that since early 2009, China’s plan of economic stimulus through infrastructure projects helped the global economy rebound. A revival began only in Q3 2009, i.e. a year after the outbreak of the crisis. In the current situation, a recovery period may be longer, given that global central banks have already used all their tools to support the economy.

China’s domestic market is starting to recover. Local players remain optimistic, as the government announced large-scale investment projects to prevent negative effects of the coronavirus epidemic on the economy. For instance, the National Development and Reform Commission is called upon to ensure the launch of large railway and highway projects. The Ministry of Industry and Information Technology demanded that the construction of 5G networks be accelerated. Over 100 water control projects will be launched.

All these initiatives are expected to boost steel demand starting March. Therefore, iron ore prices remain high. Yet, there is another point of view. Specifically, Citi analysts expect iron ore fines in China to fall to $70 this year.

China has also started to stimulate its exports. It increased export tax rebates, namely VAT refund, for some items, including galvanized and coated steel products, rebar and pipes, in a bid to boost shipment prospects. Yet, with these high prices for iron ore and scrap in China, local producers will not benefit.

The demand declines, so does the supply. Some Italian and Spanish producers of steel and rolled products suspended their facilities in order not to expose employees to the risk of infection. ArcelorMittal stated a cut in production in its plants in Italy, France and Germany. The same statements were made by Salzgitter and Thyssenkrupp. Buyers are uncertain as well — what if other companies follow their example? Hence, prices for rolled products in Europe remain high. Rebar import quotas have already been filled and there is no other alternative except for domestic producers. A fall in the euro against the dollar also helps. Though it means nothing and gives no advantages to domestic producers. Firstly, buyers will renew their stocks and trading activity will slump. Secondly, the offer price does not mean a deal, i.e. no deals can be normally made at such prices. Thirdly, a decline in scrap prices will affect prices for finished products one way or another.

There is another important issue. Domestic steelmakers work in close cooperation with European processing companies. Italy is the main coronavirus epicenter and the main importer of Ukrainian slabs. In 2019, 2.3 million tons of steel semi-finished products were shipped to Italy. If our Italian partners are placed under the quarantine, this will directly affect Ukrainian producers and sales of semi-finished products will slump.

Implications for the market

This week, domestic steel producers have experienced a fall in prices in the global market. The price of billets is $350–360 FOB, slabs — $370–380 FOB Black Sea. This is virtually the level of October 2019 when the sector’s output plunged. With current prices for iron ore, these prices for finished products are unacceptable for Ukrainian producers. And this is only the beginning.

The price quotations for steel products were impacted by a fall in scrap prices in Turkey experiencing export difficulties. A week earlier, the scrap price was $270 per ton. This week, it dropped to $250. And a further decline is projected. According to the media, warehouses in the EU are packed with scrap. If no difficulties with shipments occur, scrap prices will fall by another $20–30, which will mean a proportional reduction in prices for finished products.

The price war in the oil market killed, together with COVID-19, the demand for OCTG. Sales in this segment will be extremely low. A new OPEC agreement is needed to restore the market. Some market participants agree that it will be reached soon enough. The experience of the recent price war showed that it took more than a year to recover prices.

Falling oil prices made freight cheaper, which, theoretically, enabled domestic producers to supply to Asian countries. Unlike other regions, this is currently the only area where the demand started to recover. Our competitors, Turkey and Russia, actively use these opportunities. The latter boosted its export activity following a drop in domestic sales. This definitely increases competition and makes pressure on prices.

Today’s prices rely on May sales. And what about products with delivery in April when large consumers are closed due to quarantine? The initial two months of this year were rather successful for domestic steelmakers. Steel production in January–February was 0.4% up from the same period of the previous year. February prices allowed plants to actively sell their products with delivery in March–April and count on high capacity utilization in this period.

There is a chance that some buyers will refuse orders allegedly because of force majeure due to the quarantine. The only problem is that countries differently interpret force majeure. Hence, it is quite possible that producers will prove their arguments in courts or be flexible with buyers and cut shipments. According to Kallanish Commodities, European companies revise the terms of their contracts. The uncertainty prompts contract revisions.

Problems in the transportation of goods are not currently manifested. The quarantine measures apply to passenger traffic only. The imposition of restrictions on freight traffic in the EU would be too much. Ukrzaliznytsia (the Ukrainian Railway), EU rail and sea transport and all ports operate. Through there are some risks. The main one is linked to people, the availability of locomotive and ship crews. A disease of one crew member means quarantine for everyone. According to the media, ship owners are not interested in sending ships to Italy, because ships that entered Italian ports are denied calls in all global ports or have to undergo 14-day quarantine, starting from the date they left Italy.

Without regard to the epidemic, the sector faces identical crises every five to seven years. It has been preparing for and expecting the current collapse for several years. Those fears seemed to fade away. Yet, the misfortune came all of a sudden.

The first quarter promised to be relatively successful for steelmakers compared to the latter half of the past year. In the second quarter, all indicators will likely show an unprecedented decline, a backlash to Q4 last year. The devaluation of the hryvnia may help a little.

Steelmakers definitely expect a drop in demand by over 50% in the next two quarters. Too much remains unknown. If a resurgence of the coronavirus epidemic is prevented, money rain will quickly restore markets. Though, one must be ready for an 18-month stagnation, as Washington projects.